The Ranger Keys (レンジャーキー Renjā Kī?) are mysterious special items that were originally scattered across the cosmos until gathered by the Red Pirates. Eventually, after Basco's betrayal, Aka Red gives them to Marvelous to keep safe, learning later with his crew that they will enable to obtain the Greatest Treasure once the Ranger Keys' full power is revealed. Normally stored in Gokai Treasure Box (ゴーカイトレジャーボックス Gōkai Torejā Bokkusu?), the Ranger Keys are summoned through the Gokai Buckle by a thought-based teleportation system called the Key Road. When used with a Mobirates, the Ranger Keys fold to form keys which can allow the user to become a Gokaiger or access the powers of one of the previous 34 Sentai groups. By using it on the weapons it can activate a Final Wave (ファイナルウェーブ Fainaru Wēbu?) attack. By unlocking the greater power of the Legend Sentai's Ranger Keys, the Gokaigers can access forms of the previous Super Sentai teams' mecha that power up Gokaioh. In addition, the Gokaigers can access special powers as the Legend Sentai members. These include the magic spell Maagi Magi Go Gokai (マージ・マジ・ゴー・ゴーカイ Māji Maji Gō Gōkai?) as the Magirangers, which holds an enemy in place, the Gokai Kurumagic Attack (ゴーカイクルマジックアタック Gōkai Kurumajikku Atakku?) as the Carrangers, and the Shinken Six Continual Slash (シンケン六連斬り Shinken Rokuren Giri?) as the Shinkengers. 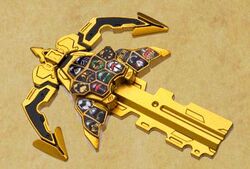 By the time they arrived on Earth, the Gokaigers already had all of the Ranger Keys pertaining to the core members of each past Super Sentai team (three for Sun Vulcan, four for Abaranger and five for each remaining team), but did not know that many teams had extra members besides the main ones, usually five. The crew manage to obtain the sixth heroes' Ranger Keys from Basco (ex. Dragon Ranger, Abare Killer, the Go-on Wings, and Gosei Knight), which became Gokai Silver's Ranger Keys. But for reasons unknown, Gai's imagination has powerful effects on the Ranger Keys, initially allowing him to merge the Go-on Gold and Go-on Silver Keys into the singular Go-on Wings Key (ゴーオンウイングスキー Gōon Uingusu Kī?), allowing him to transform into a hybridized version of the Go-on Wings (with his right side Go-on Gold and his left Go-on Silver), and then merging all of his Ranger Keys into the Gold Anchor Key (ゴールドアンカーキー Gōrudo Ankā Kī?), allowing him to access Gold Mode.

However, there are ten more Ranger Keys in Basco's possession, each representing warriors who are indirect members of the previous Super Sentai teams (ex. Signalman and Princess Shinken Red).

In Gokaiger Goseiger Super Sentai 199 Hero Great Battle, it is revealed that past Super Sentai warriors are able to regain their powers when they take their respective Ranger Keys into their possession. This occurs when the Goseigers steal their keys from the Gokaigers during the latter team's battle with the Zangyack Empire.

Retrieved from "https://prw-powerrangers.fandom.com/wiki/Ranger_Keys?oldid=4575"
Community content is available under CC-BY-SA unless otherwise noted.